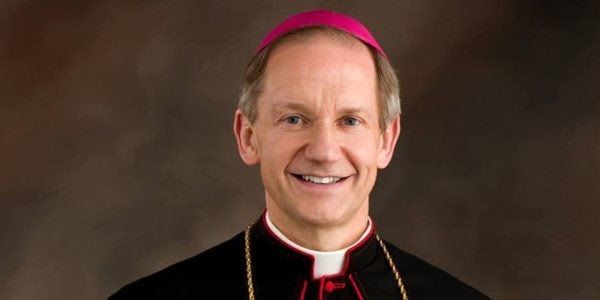 A Catholic bishop has instructed priests in his central Illinois diocese to deny communion last rites and funeral rites to married gay people unless they repent. In the decree he sent to priests deacons seminarians and staff in his Springfield diocese last week Bishop Thomas Paprocki sets forth a set of norms on same-sex marriage and related pastoral issues that he says are the policy of the diocese. Paprockis decree bans priests and parish staff from performing same-sex marriages or allowing same-sex weddings or receptions at any Catholic facilities. People in same-sex marriages should not present themselves for Holy Communion nor should they be admitted to Holy Communion. A person in a same-sex marriage who is facing death may only receive communion after expressing repentance for his or her sins. Finally Paprocki writes that unless they have given some signs of repentance before their death people in same-sex marriages may not receive a Catholic funeral. The decree drew strong reactions from LGBT Catholic groups including DignityUSA. [T]his document is mean-spirited and hurtful in the extreme the groups incoming president Christopher Pett said in a statement. It systematically and disdainfully disparages us and our relationships. Bishop Paprockis decree makes it very clear why so many LGBTQI people and their families feel unwelcome in the Catholic Church and why so many leave it Pett wrote. It is simply cruel and shameful to refuse burial or Communion to those who seek the grace and comfort that our Church offers at some of the most difficult moments of life added the organizations executive director Marianne Duddy-Burke. This is reminiscent of the appalling practice of denying Communion funerals and burial to people dying of AIDS at the height of the epidemic. Some say Paprockis decree is at odds with the message and tone of Francis document on family life titled Amoris Laetitia or The Joy of Love. In that 2016 paper Francis rejected same-sex marriage but also instructed priests to be inclusive: I would also point out that the Eucharist is not a prize for the perfect but a powerful medicine and nourishment for the weak. ift.tt/2sJEmWh

Gay conversion therapy: ‘It made me feel broken’

Imam thanks Allah after Pride is cancelled due to coronavirus

Trump Caught On Hot Mic Calling Journalists ‘All My Killers’ While Boasting To Members Of His Golf Club: Report

William Shatner Tweets ‘Cisgender’ Is Used to ‘Debase,’ ‘Harass’ Him