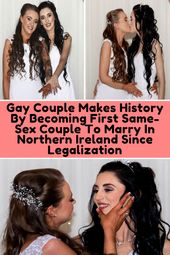 Two women from Belfast have just made history by becoming the first same-sex couple to get married in Northern Ireland since legalization was introduced. Sharni and Robyn tied the knot yesterday, February 11, after having been in a relationship for six years. Initially, the couple had planned to register their civil partnership on the same date, but in light of the January 13th legalization of same-sex marriage in Northern Ireland, the couple decided to throw a beautiful wedding.

Hungary LGBT: Content aimed at children to be banned