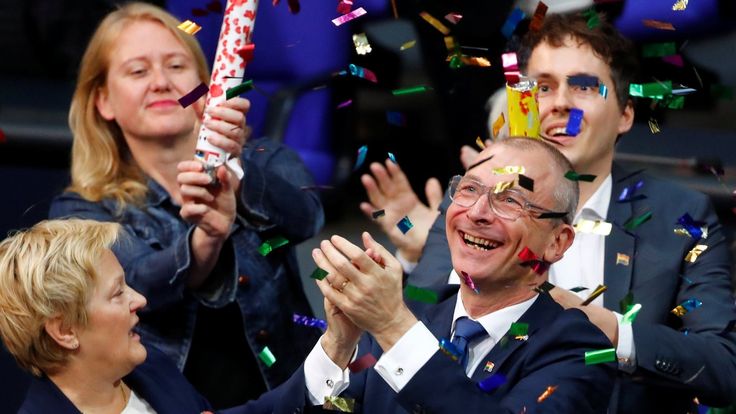 Germany gay marriage approved by MPs in snap vote tmbw.news/… A clear majority of German MPs have voted to legalise same-sex marriage, days after Chancellor Angela Merkel dropped her opposition to a vote.The reform grants couples now limited to civil unions full marital rights, and allows them to adopt children.Mrs Merkel’s political opponents were strongly in favour. But the chancellor, who signalled her backing for a free vote only on Monday, voted against.The bill was backed by 393 lawmakers, 226 voted against and four abstained.The German legal code will now read: “Marriage is entered into for life by two people of different or the same sex”, AFP news agency reported.Following Friday’s vote, Mrs Merkel said that for her marriage was between a man and a woman. But she said she hoped the passing of the bill would lead to more “social cohesion and peace”.How did this sudden vote come about?During her 2013 election campaign, Mrs Merkel argued against gay marriage on the grounds of “children’s welfare,” and admitted that she had a “hard time” with the issue.But in an on-stage interview with the women’s magazine Brigitte on 26 June, she shocked the German media by saying, in response to an audience member’s question, that she had noted other parties’ support for gay marriage, and would allow a free vote at an unspecified time in the future.The usually-cautious chancellor said she had had a “life-changing experience” in her home constituency, where she had dinner with a lesbian couple who cared for eight foster children together.As the news spread on Twitter, supporters rallied under the hashtag #EheFuerAlle (MarriageForAll) – and started calling for a vote as soon as possible.Mrs Merkel’s current coalition partners – the centre-left Social Democrats (SPD), who are trailing Mrs Merkel’s Christian Democrats (CDU) in…Read more on TmBW.News