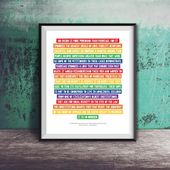 This print is to commemorate the day gay marriage was legalized in the United States. The last paragraph of Justice Kennedy’s Opinion reads: No union is more profound than marriage, for it embodies the highest ideals of love, fidelity, devotion, sacrifice, and family. In forming a marital union, two people become something greater than once they were. As some of the petitioners in these cases demonstrate, marriage embodies a love that may endure even past death. It would misunderstand these men and women to say they disrespect the idea of marri

This is Maryland Governor Martin O’Malley, who just signed the same-sex marriage…