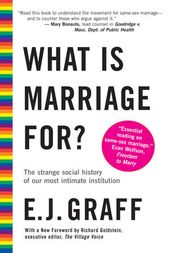 In the wake of the Massachusetts Supreme Judicial Court’s historic Goodridge decision, a reissue of the bible of the same-sex marriage movement Will same-sex couples destroy “traditional” marriage, soon to be followed by the collapse of all civilization? That charge has been leveled throughout history whenever the marriage rules change. But marriage, as E. J. Graff shows in this lively, fascinating tour through the history of marriage in the West, has always been a social battleground, its rules constantly shifting to fit each era and econ