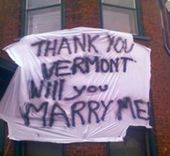 In April of 2000, Vermont became the first state in the country to give same-sex couples the right to enter into civil unions — legal partnerships which would grant those couples the same rights and benefits as those in legal marriages. Same-sex marriage later became officially legal in Vermont on September 1, 2009.⁠ ⁠ Photo is a still from "State Of Marriage." Credit: Floating World Pictures

Are you gay, lesbian or bi-sexual? Do you want to plan a same-sex marriage cerem…

12 Iconic Photos from When Same-Sex Marriage Was Legalized…